Component Interfaces (CI) are PeopleSoft’s go-to solution for data import, as they are capable of running all the validations data goes through when entered manually. For example, Excel to CI spreadsheets are often used to import data into a new site. They are also very useful for application administrators to load or transform data.

For recurring data loads, calling CIs from Application Engine should be great too! Unfortunately, there some subtle traps to avoid when doing this. Searching CI error application engine shows a lot of questions. Basically, some categories of CI validations, such as invalid prompt values will cause the Application Engine to crash when the CI encounters a data error.

# Fix recommendations usually talk about avoid “naive” code like this:

# What’s wrong with this code? Why could it abend?

Is that code really naive? Not at first sight, no. Everything is nicely wrapped in try/catch and the exceptions seem like they should be caught. Application Engines are normally quite robust, so this should work.

Before I go into what will seem like an over-complicated solution, it’s important to understand why this is more fragile than it seems:

When the CI errors it closes all open cursors. The PeopleCode using the CI was under a DO SELECT step. The CI error closed the DO SELECT and caused the AE to abend.

# To avoid these problems, we need to restructure AE->CI calls

# From Shared SQL connections (in black):

# No division of concerns/no reusable code

I didn’t originally intend to create an Application Class, but while adapting some earlier code I had written for a client, I realized that most of the repetitive and tricky code could be moved to a reusable class that can be inherited.

You don't have to use this class but you're welcome to take some inspiration from it.

AE2CI:CiWrapper, the generic Application Class handles most of the low-level technical details around the generally recommended approach: passing a Rowset (in this particular case, to be exact, an in-memory Record instance) to the CI instead. All you have to do is plugging in your actual business rules into Method.ci_business_logicon a derived class.

The base classes, along with more explanations and sample code, are on my AE2CI repository on Github.

Method.ci_business_logic is where you map your incoming data to the CI being used.

This really doesn't do much, only writes BIRTHCOUNTRY to Record.PERSONAL_DATA via its CI. Full code is on Github

You need to return a boolean indicating if saving is required. Notice also that when you see some expected business problem with the data, you populate the %Super.fld_message.Value and return False. The rest of the code is much of the same and is typical of standard PeopleSoft Component Interface code.

Note: I did not show method callci because it is always exactly the same, but needs to be re-implemented on each subclass, at least on PT 8.51, otherwise it would call the super’s ci_business_logic.

The other class, Wrap_CI_JOB_DATA is very similar full code:

(we care about what's in the blue box) 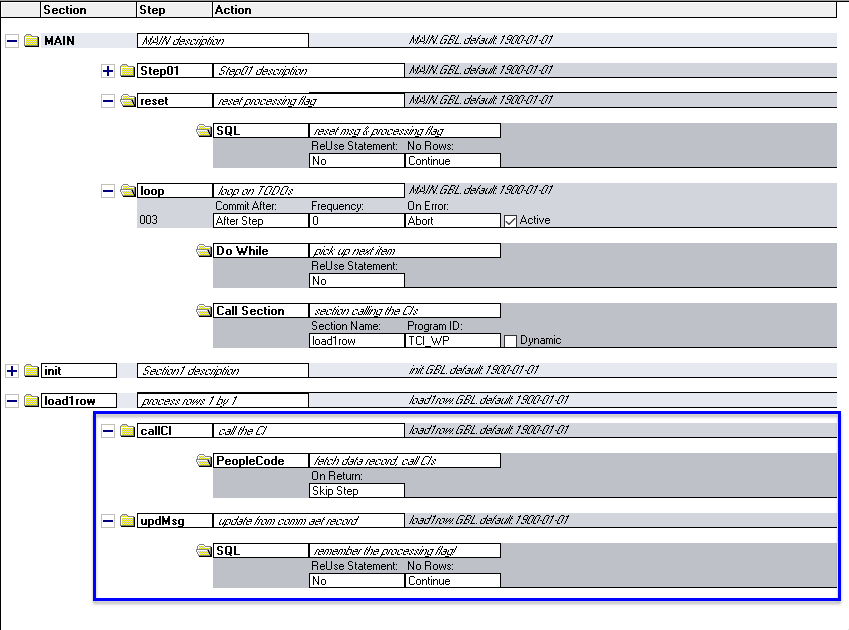